Federer and Murray will meet for the ninth time while Nadal and Djokovic will face each other for the 19th time in all and the fifth this year.

It is the first time since the Monte Carlo Open in 2008 and only the 13th time in the past 25 years that the top four-ranked players have made it to the semi-finals of a Tour event. 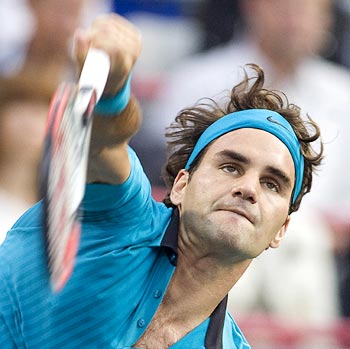 Top seed Federer cruised past former world number one Lleyton Hewitt 6-3, 6-4 while holder Murray had to battle back to beat Frenchman Julien Benneteau 4-6, 6-3, 6-1.

Murray has registered six wins in his eight clashes with Federer.

"He (Murray) has been more or less the best player in the world on hard courts this year," the Swiss said in a courtside interview. "I know it's going to be a very tough match. I just have to come out with my game plan and hope it works."

Federer was never troubled by Hewitt, breaking once in each set to record his 200th victory in a Masters Series event.

Briton Murray, chasing back-to-back Masters Series titles after his win in Montreal last week, recovered from a set and 2-0 down to take his winning streak to eight matches.

Frenchman Benneteau, a lucky loser entrant after the withdrawal of Juan Martin del Potro, took advantage of a below-par performance from Murray in the first set.

When the Scot dropped his serve in the second game of the second set, he looked in danger of defeat to world number 55 Benneteau.

However an epic 53-shot rally won by Murray changed the match completely and after breaking back, he dropped just two more games.

"That point made a big difference. I think he was very tired after that rally as well. I managed to stay strong after that.

"When you can come through matches like that, it's a lot better. Everyone can win when they play good tennis."

In just his second event back after two months out with injury, Nadal continued his resurgence with an impressive win over world number 18 Berdych.

The Spaniard broke in the first game of the match and then again in the 11th game of the second before serving out for victory.

"I have improved a little bit every day and today I think I played a really good match," Nadal said.

"To be in the semi-finals is more than I expected when I came here so it's very special."

Djokovic played his best match of the week to beat Simon 6-4, 7-5 and said he was not concerned that all the attention was on the top three.

"Maybe I'm not in the so called spotlight at the moment, but I could benefit from that," he said. "Just try to keep my concentration on my work and then perform well on the court.

"I'm gaining confidence by winning matches and that's the most important thing for me now. I know I'm physically fit, it's just matter of self belief."

© Copyright 2021 Reuters Limited. All rights reserved. Republication or redistribution of Reuters content, including by framing or similar means, is expressly prohibited without the prior written consent of Reuters. Reuters shall not be liable for any errors or delays in the content, or for any actions taken in reliance thereon.
Related News: Murray, LUCKY LOSER Frenchman Benneteau, Juan Martin del Potro, Czech Tomas Berdych, Frenchman Gilles Simon
COMMENT
Print this article