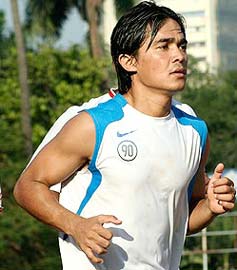 Striker Sunil Chhetri, who is recovering from an ankle injury, made it to the 20-member Indian squad for the Nehru Cup international football tournament, starting at the Ambedkar stadium in Delhi on Wednesday.

Coach Bob Houghton said at the pre-tournament press conference on Tuesday that he was hopeful of Chhetri being available for the latter part of the five-nation tournament.

He said the youngsters left out of the squad will get their chances in future.

India play their first match against Lebanon in the tournament opener on Wednesday.