A pumped up Maria Sharapova overcame Victoria Azarenka of Belarus 6-7, 6-4, 6-2 to advance to the third round of the LA Championships on Wednesday.

World number one and top seed Dinara Safina also moved ahead with a clinical 6-2, 6-4 victory over Slovakia's Daniela Hantuchova. 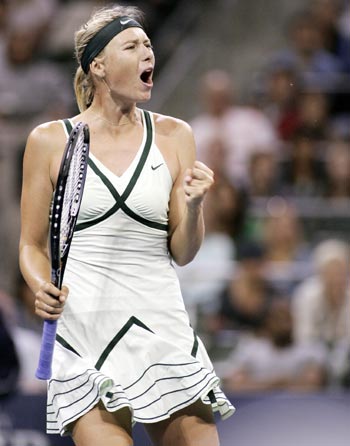 In her highest-ranked victory since returning to the tour in May after shoulder surgery, Sharapova set up the win by countering world number nine Azarenka's power from the baseline and pouncing on her weak second serve.

"I loved it," Sharapova told reporters. "Going into the match I knew I would have to dig deep and find ways to win and hang tough."

After 20-year-old Azarenka sealed the first set tiebreaker 7-4 with a gutsy forehand passing shot, Sharapova varied her attack to deny the fleet Belarussian a chance to dictate terms inside the baseline.

The Russian three-time grand slam champion took the second set with a service winner and then cruised to victory after taking two early breaks in the third.

"I don't do anything well today," Azarenka said. I can't feel good about anything. Everything was on the top of the net or a little bit out."

Sharapova faces Alona Bondarenko in the third round on Thursday, the Ukrainian world number 33 accounting for Czech Lucie Safarova 5-7, 6-4, 7-5.

Defending champion Safina beat Hantuchova for the fourth time in seven meetings to advance to the third round and become the first to qualify for the season-ending WTA championships in Qatar.

"We play the same way, so it depends on who's going to take charge of the points, and I think at the crucial times I was more aggressive today," said Safina, who faces 14th seed Zheng Jie of China in the third round.

© Copyright 2021 Reuters Limited. All rights reserved. Republication or redistribution of Reuters content, including by framing or similar means, is expressly prohibited without the prior written consent of Reuters. Reuters shall not be liable for any errors or delays in the content, or for any actions taken in reliance thereon.
Related News: Czech Lucie Safarova, Victoria Azarenka, Alona Bondarenko, Ai Sugiyama, Dinara Safina
COMMENT
Print this article