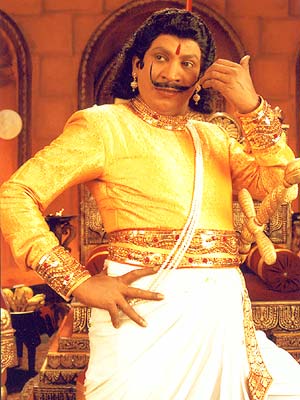 When director Shankar's production house S Pictures produced the small Kadhal with Bharath and Sandhya in the lead, nobody expected the film to be a trailblazer. This simple teenage love story went on to become a huge hit. Even Cameron Bailey, the Film Programmer of the Toronto Film Festival, spoke highly of Kadhal.

Shankar's next production also seems likely to be much talked about. If Kadhal launched Balaji Shaktivel as a filmmaker of substance, Imsai Arasan 23rd Pulikesi is launching another young filmmaker, former-journalist Sinbuthevan. A historical, Imsai... has an unlikely hero, comedian Vadivelu. Yes, the film is a complete comedy.

But the film which was supposed to release in early June ran into trouble as the Animal Welfare Board of India stopped its release alleging that the filmmakers did not take the Board's permission before using animals in the film. A historical, the film understandably involves many animals including horses. It was only after director Shankar and actor Vadivelu met the Chief Minister that the problem was solved.

Within a few days, Imsai was given a no-objection certificate by the Board and the film is slated to release on July 8. Shankar is confident that Imsai Arasan 23rd Pulikesi will be as big a hit as Kadhal.

'Amar Jawan Jyoti too sacred to be touched, relocated'

'Infections are going to skyrocket'

My face is everywhere: Priyanka on Cong CM face in UP