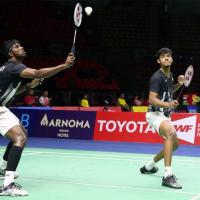 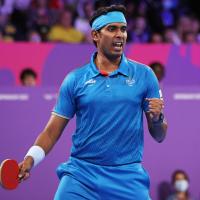 He had earlier won the gold medal in the mixed doubles with Sreeja Akula and the men's team gold medal.
Read more > 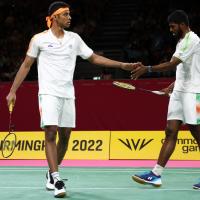 17:56   Chirag-Satwiksairaj win doubles gold
Chirag Shetty and Satwiksairaj Reddy stormed to the gold medal in the badminton men's doubles at the 2022 Commonwealth Games.

The Indian duo registered a straight games 21-15, 21-13 victory against England's Sean Vardy and Ben Lane in the final.
Read more > 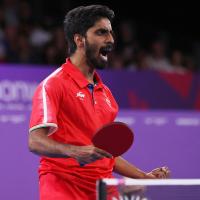 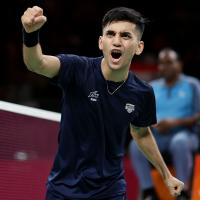 16:47   Lakshya Sen wins badminton singles GOLD
Lakshya Sen won the men's singles gold medal after beating Malaysia's Tze Yong NG 19-21, 21-9, 21-6 in the final.
The momentum was firmly with Sen in the decider as he opened a big gap to race into the 8-4 lead.
A superb crosscourt off the forehand and some stunning defence saw NG close the gap to 6-9.
Sen played a few cracking shots to stretch the lead to 11-7 at the break.
Sen looked in no mood to relent as he took a 15-9 lead.
NG tried to inch his way back but Sen kept his head to clinch the decider 21-16.
Read more > 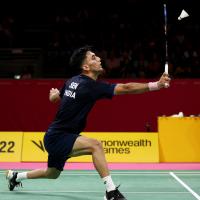 16:13   Sen wins 2nd game; makes it 1-1
Things followed the same script as NG kept edging ahead to take a 8-6 lead.
However, Sen staged a brilliant turnaround from that point onwards to win 15 of the next 16 points to clinch the second game 21-9 and level the match at 1-1.
Read more > 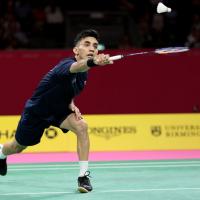 Interestingly, a service fault from Sen gave his opponent a freebie, as he took a slender 11-9 lead at the break.

But Sen kept himself in the contest, including a crosscourt winner despite the broken strings on the racket made it 10-12.

There was nothing to choose between the two players, who battled hard and long for each point.

A cracking forehand crosscourt winner saw the Indian level the score at 18-18.

Sen then left everyone gasping with a stunning defensive shot as he lunged to his right and somehow managed to get his racket and get the shuttle wide of NG for a valuable point. 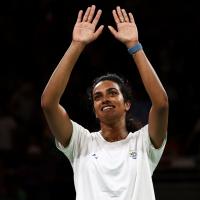 14:56   Sindhu beats Li to win singles GOLD
P V Sindhu beat Canada's Michelle Li in straight games to win the badminton women's singles gold medal at the 2022 Commonwealth Games on Monday.
Double Olympic medallist Sindhu registered a convincing 21-15, 21-13 victory to clinch her first singles gold at CWG -- her third overall at the Games.
The story in the second game was no different as Sindhu, who was beaten by compatriot Saina Nehwal in the final in the last edition of Games in Australia's Gold Coast in 2018, controlled the proceedings with judicious play, luring Li to the net and going for the deep drop when the opportunity arose.

A 11-6 lead at the break virtually put an end to whatever hopes Lin may have entertained of a fightback as Sindhu went all-out for the kill, racing to 13-8 and 15-11. 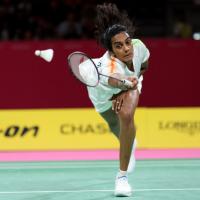 14:41   FINAL: Sindhu wins first game vs Michelle
PV Sindhu made a good start to the final, winning the first game 21-15 against Li.
It was a hardfought opening game but Sindhu managed to close out the last few points and take the lead.
Sindhu led 11-8 at the interval in the first game. After the change of ends two unforced errors by Li enabled the Indian to extend it to 13-8. She kept the momentum going with a good mix of drops and smashes to take the game 21-15.
Read more > 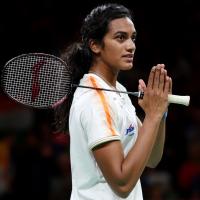 13:04   Sindhu vs Michelle in gold medal match
P V Sindhu will be aiming to win her maiden Commonwealth Games gold medal when she takes on Canada's Michelle Li in the women's singles final on Monday.
Double Olympic medallist Sindhu advanced to the final after beating SIngapore's Jia Min Yeo 21-19, 21-17 in the semi-final on Saturday.

Sindhu had lost in the singles final in the last edition of CWG in Gold Coast in 2018 to compatriot Saina Nehwal.

Incidentally, when Sindhu bronze at the Commonwealth Games in 2014, Li had won the singles gold medal.
Sindhu leads 8-2 in the head-to-head count against Li, but the Indian has finished on the losing side in the last two matches.
India will be aiming for more gold medals on the court, when Lakshya Sen clashes against Malaysia's Tze Yong NG in the men's singles final.
Chirag Shetty and Satwiksairaj Reddy will start as favourites in their men's doubles final against England's Ben Lane and Sean Vendy.
Read more > 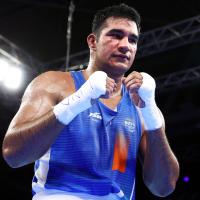 01:38   Boxer Sagar claims silver
Indian super heavyweight boxer Sagar will go up against England's Delicious Orie in the gold medal bout of the over 92 Kg category event.
Sagar has won the first round by unanimous decision. Orei takes the second round.
Drama! A medical timeout and the bout is temporarily stopped. Sagar seems to be bleeding.
Sagar claims silver after he came in second best to Orie by unanimous decision.
Read more > 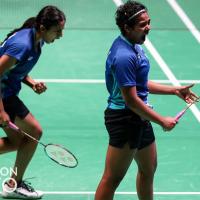 01:15   Badminton: Treesa-Gayatri win bronze
Badminton: In women's doubles bronze medal match, India's Treesa Jolly and Gayatri Gopichand are up Australia Hsuan-Yu Wendy and Gronya Somerville. The Indians have won the first game 21-15. They won the second game 21-18 and with that bagged the bronze.
Read more > 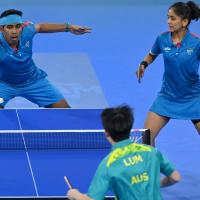 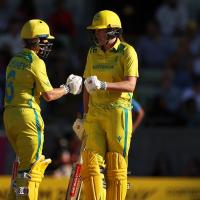 00:31   Badminton: Srikanth seals bronze
World championship silver medallist Kidambi Srikanth signed off with a bronze.
Srikanth prevailed over Singapore's world number 87 Jia Heng Teh 21-15, 21-18 to claim a bronze medal to go with the silver that he had won four years ago in Gold Coast.
The Singaporean grimaced in pain after suffering cramps on his left thigh in the second game but still kept fighting till the end.
Read more >

'Those who politicise...': Jaishankar's jibe at Pak, China

In Pictures - Djokovic dazzles on return to action at Laver Cup