23:50
Spain in red, Morocco are wearing their white away strip.
Spain's play maker Andres Iniesta is already running the show.  It's early and already getting lively.
Nordin Amrabat fouls both Isco and then Sergio Ramos.
In the very next minute a reckless contact from Pique on Boutaib. The referee doesn't even look at the monitor. No VAR.
Khalid Boutaib gives Morocco 1-0 lead in the 14th minute.
Ramos and Iniesta left the ball to each other on the halfway line. The opportunist Boutaib grabbed on to the ball and sent it home between De Gea's legs. 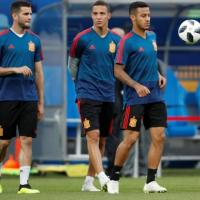 23:12   FIFA World Cup: Spain make one change for Morocco game
Thiago Alcantara will start ahead of Lucas Vazquez as Spain coach Fernando Hierro made one change to his line-up for their final World Cup Group B game against Morocco on Monday.
Spain, level with Portugal at the top of the standings on four points, will be relying for goals on striker Diego Costa as top spot could be decided by goal difference.
Morocco, looking to salvage pride after two 1-0 losses, made one change from the team who faced Portugal with defender Romain Saiss coming in for Medhi Benatia.
Spain and Portugal start level on four points with Iran on three.
Portugal play Iran in the other Group B match in Saransk.
Read more >

21:24   Cavani scores in the 90th minute as Uruguay top group
Uruguay top Group A after thrashing Russia 3-0.
Four minutes of added time and Cavani comes off and replaced by Gomez.
Russia get a free-kick after a foul by Coates and it's shot long.
Uruguay get another late chance and the final whistle goes off.
90th minute corner for Uruguay. Godin gets the header and Cavani gets a touch off the rebound to score his first of the night.
That is Uruguay's 3rd goal of the evening.
Russia threaten on the counter but the Uruguayan keeper does well to save.
Uruguay now get a corner and the Russian keeper does well to keep it out.
Cavani and Suarez are casual on the attack.
Rodriguez shoots from far but the Russian keeper does well to save and Russian defender kicks it out on the rebound.
A corner for Uruguay but it's nothing.
Russia have shown intent in the 2nd half but have fallen short.
Read more >

21:04   Russia in a spot
With 15 minutes to go, Russia are still to score.
Russia trying and trying but just can't find the net.
Zobin passes to Dzyuba who shoots wide!
Nandez comes off as Rodriguez adds a pair of fresh legs for Uruguay.
68th minute, Cavani makes a solo run into the box but shoots wide!
Russia trying search for the goals but cannot get past Diego Godin and his men at the back.
Uruguay make a change --  De Arrascaeta replaces Rodrigo Bentancur.
Read more >

20:51   Russia still unable to find the net
Uruguay again enjoying major possession.
Russia make a rare foray forward but the Uruguayan defence are equal to the task.
Again, play is centred around the Russian half.
Russia make a change as Miranchuk is replaced by Smolov.
Russia threaten but cannot penetrate the defence.
Even though there is a lot of noise in the stands the action on the field is a bit subdued.
Free-kick for Russia in the 51st minute but Samedov shoots long.
The match restarts and Suarez has been brought down just outside the box.
Cavani steps up to take the free-kick but he shoots it into the wall.
Russia have made one change at the break as Kuziaev comes in for Gazinskii.
Read more >

20:19   Russia down to 10-men
2 minutes of added time and there is a lack of purpose from both teams.
Russia have seemed to have lost spark after the departure of Smolnikov.
There is a semblance of a late charge here but it's nothing as the half-time whistle goes off as Uruguay head into the break comfortably placed.
The game is just meandering into a dull show in the last few minutes before half-time as Uruguay keep possession.
Read more >

20:12   Smolnikov gets red card
40 minutes on the clock and Uruguay still pressing.
Russia forced to make an early change and Mario Fernandes replaces Denis Cheryshev
2nd yellow for Smolnikov and he gets the marching orders for bringing down Laxalt.
Russia are now down to ten men.
Torreira makes a hash of the free-kick.
Russia get a free-kick but it is shot long.
Even as Uruguay continue to press Smolnikov picks up a booking for fouling Vecino.
Cavani misses from close range.
Read more >

19:58   It's an own goal off Russia's Cheryshev
A corner for Uruguay, the ball deflects towards Diego Laxalt on the 2nd touch and that goes into the net off Russia's Cheryshev.
Own goal but Uruguay have a 2-0 lead here in the 24th minute!
Russia have a corner but to no effect.
Russia fighting back here after that early reverse.
They get another corner but again amounts to nought.
Read more > 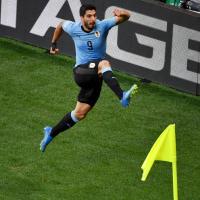 19:46   Suarez scores 53rd international goa
Uruguay now counter-attack and Gazinskii is booked for a challenge just outside the box.
Suarez takes the free-kick and converts!
He shoots wide of the wall and drills the ball into low right corner and the goal comes in the 10th minute.
Russians break again but denied by some fine defending
The match kicks off amid deafening noise at the stadium and Uruguay enjoy early possession here.
Uruguay put pressure on the hosts here as Cavani plays it to Vecino, who shoots low but wide from 25 yards.
Russia threaten on the break but it is only that -- a threat.
Uruguay keep the pressure on the Russian defence.
Read more >

19:25   A draw will ensure Russia will finish as group winners
With both teams having already qualified for the last-16, Monday's match will decide the group winners.
A draw will ensure Russia will finish as group winners due to their superior goal difference.
After Russia, the lowest ranked team at the tournament, surpassed expectations by winning both of their games so far, pressure has been mounting on Cherchesov's men to keep up the winning run.
Cherchesov, however, expects his players will be up to the task.
They keep asking me about pressure but this is a medical term, Cherchesov told reporters.
We are professional players who are preparing for our game.
This is the World Cup and the team must be in the optimum condition. We are a team and we must do our job."
Read more >

Goalkeeper Fernando Muslera will win his 100th cap for Uruguay after being selected to face Russia in Group A on Monday.

He will also break his nation's record for World Cup appearances, with 14.

Sebastian Coates comes in for the injured Jose Gimenez in defence as Uruguay coach Oscar Tabarez makes four changes for the clash.

With both teams already qualified for the last 16, Russia coach Stanislav Cherchesov also chose to make three changes to the side that beat Egypt 3-1.

The match will decide who finishes top of the group as both teams are on six points.

01:09   FIFA World Cup: Colombia 3 vs Poland 0
It's all over now for Poland.
Colombia 3 Poland 0
It came from a Poland throw-in. Rodriguez sniffs an opportunity and runs with it towards the half-way line and sends a brilliant pass into the path of Cuadrado. He has quite a bit still to do, he outruns two trailing defenders and sends the ball past Szczesny!
Read more > 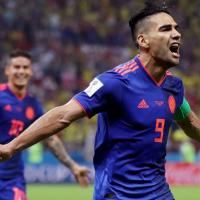 01:05
First real chance for Poland in the 59th minute.
Lewandowski takes the ball down with a deft touch, but his left-footed strike is thumped into the mid-riff of goalkeeper Ospina. It is an excellent save.
Poland have slightly more possession. They attack, get numbers forward and then the ball is out of play.
But we have another goal from Colombia here in the 70th minute!!!
Falcao it is!
Quintero send a great pass, Falcao, running inside from the right, through controls the ball and what a great finish.
Colombia 2 Poland 0

00:45   FIFA World Cup: Colombia 1 vs Poland 0
Poland failed to attempt a single shot on target in the first half. But in the second half it changed pretty soon.
Close!!!
Finally a delivery for Lewandowski to latch onto, he nearly touched the ball. He really got quite close to it.
Poland need to score or they are out of the World Cup!
Colombia 1 Poland 0
Read more >

00:27   FIFA World Cup: Colombia 1 vs Poland 0 at halftime
Yerry Mina gets the much deserved Colombian goal.
Robert Lewandowski playing in the midfield is not helping Poland.
For the fact, James Rodriguez has been directly involved in nine goals in seven World Cup appearances for Colombia, scoring six and assisting three. -@GracenoteLive
Read more > 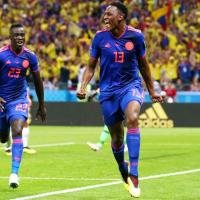 00:16   FIFA World Cup: Colombia 1 vs Poland 0
Colombia continue to threaten and is finally rewarded in the 40th minute.
It all started with Rodriguez who chipped a left-footed cross to Mina. Mina outjumped everyone else in the area and headed the ball in.
Szczesny rushed from goal in an effort to reach the ball but it was all too late.
Colombia 1 Poland 0
Read more >

00:06
Half an hour in and it is still goalless.
Early blow for Colombia as Aguilar is stretchered off, and Uribe replaces him.
Both sides have been getting little joy from set pieces so far.
Falcao is marked by three defenders hasn't been able to get on the ball.

All Pakistan Must See These Sad Images