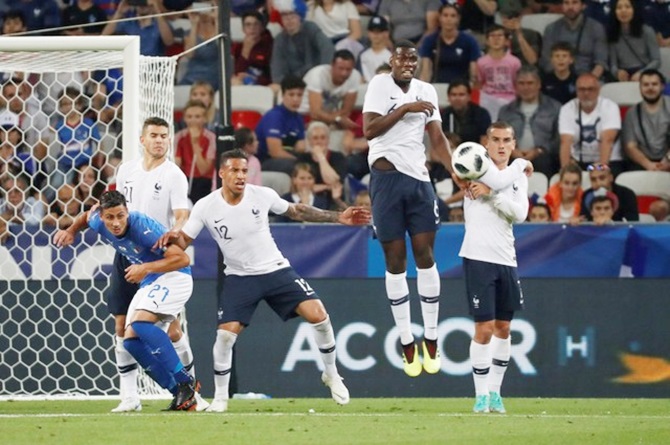 The final whistle goes off.
France beat Belgium 1-0 after Samuel Umtiti's winner as the Belgians were denied by some stoic defending by the Frenchman.
Belgium's No 9 Lukaku was kept at bay throughout the match and though Hazard and De Bruyne worked hard to create, they lacked the finishing in the end.
France look for a late double.
Pogba slips it in to Tolisso, who is denied by Courtois.
Belgium still looking for a late equaliser but De Bruyne's cross is headed by the French defence.
6 minutes of added time as Belgium stare down the barrel.
Mbappe gets a yellow for being cheeky.
Greizmann fires in a late shot but Courtois does well to save.
De Bruyne takes the free-kick but to no avail. It gets booted away, De Bruyne sends in a lovely pass towards Lukaku, who was not in the range.
Kante booked for bringing down Hazard.
Lloris blocks a superb Witsel effort as Carassco comes in for Fellaini.
The French fans are dancing in the stadium as victory looks imminent.
Belgium attack on the counter as Hazard cuts through defenders but is brought down by Giroud, Play on says the ref.
De Bruyne then overcooks a shot on goal as they try to look for the equaliser.
The ginger-haired medio has now made the third mis-pass.
Free-kick for France, taken by Greizmann and Pogba heads it over.
Witsel fouls Griezmann.
Mertens now delivering quality crosses but Belgium just not getting the ball into the target.
Anderwerield gets a yellow now for a foul on Matuidi.
« Back to LIVE

My face is everywhere: Priyanka on Cong's CM face in UP

"You are seeing my face everywhere," the Congress leader added while addressing a press conference to release the party's 'youth manifesto' along with her brother and former president Rahul Gandhi.

Punjab Chief Minister Charanjit Singh Channi on Friday said he would file a defamation case against Aam Aadmi Party national convenor Arvind Kejirwal, who has dubbed him as a dishonest man after the Enforcement Directorate carried out...

Netaji's grand statue to be installed at India Gate: PM

Till the statue, made of granite, is completed, a hologram statue of his would be present at the same place.

Vote! Who Will Win The Second ODI?

The second One Day International between India and South Africa will be played at Paarl starting 1400 IST this afternoon.

'The ground is shifting in UP'

'Outside the core voter base of upper caste Hindus, there is a large section unhappy with the performance of the BJP.'