23:48   England playing at a great tempo
Croatia look disjointed and overawed by this confident England team.
They can't keep the ball long enough.
Another corner for England as they continue to push forth.
Alli takes the corner, Trippier nearly had another one, just heads it down wide of the post.
England keep possession and continue to press forward.
Dele Alli challenged and England have a corner.
Young takes it and nothing comes of it.
Croatia now showing some urgency.
Perisic floats a cross across to Mandzukic, Young puts it out and that is a corner for Croatia.
It comes to nought.
Read more >

23:37   Trippier scores off a free-kick
Trippier scores his first international goal in style.
England press early.
Lingard passes to Dele Alli who is brought down just outside the box by Modric. A free-kick to England.  Trippier going to take it. And Trippier scores!
England take early lead.
A perfect strike, right over the wall and into the right top corner!
Read more > 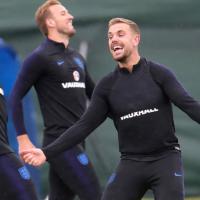 England's starting line-up for their World Cup semi-final against Croatia on Wednesday remained unchanged for the third knockout match in a row, with coach Gareth Southgate sticking to his trusted 5-3-2 system.

Captain Harry Kane, leading scorer in the tournament with six goals, will spearhead the attack alongside Raheem Sterling, who has not scored in more than 1,000 days for England, as they look to reach their first World Cup final in 52 years.

Croatia coach Zlatko Dalic brought in midfielder Marcelo Brozovic in place of forward Andrej Kramaric in an effort to control the pace of the game.

Key defender Sime Vrsaljko was passed fit to start after recovering from a knee injury. 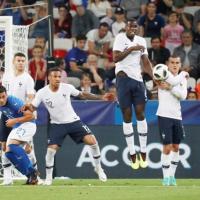 01:29   Umtiti headed in the winner just after the break
The final whistle goes off.
France beat Belgium 1-0 after Samuel Umtiti's winner as the Belgians were denied by some stoic defending by the Frenchman.
Belgium's No 9 Lukaku was kept at bay throughout the match and though Hazard and De Bruyne worked hard to create, they lacked the finishing in the end.
France look for a late double.
Pogba slips it in to Tolisso, who is denied by Courtois.
Belgium still looking for a late equaliser but De Bruyne's cross is headed by the French defence.
6 minutes of added time as Belgium stare down the barrel.
Mbappe gets a yellow for being cheeky.
Greizmann fires in a late shot but Courtois does well to save.
De Bruyne takes the free-kick but to no avail. It gets booted away, De Bruyne sends in a lovely pass towards Lukaku, who was not in the range.
Kante booked for bringing down Hazard.
Lloris blocks a superb Witsel effort as Carassco comes in for Fellaini.
The French fans are dancing in the stadium as victory looks imminent.
Belgium attack on the counter as Hazard cuts through defenders but is brought down by Giroud, Play on says the ref.
De Bruyne then overcooks a shot on goal as they try to look for the equaliser.
The ginger-haired medio has now made the third mis-pass.
Free-kick for France, taken by Greizmann and Pogba heads it over.
Witsel fouls Griezmann.
Mertens now delivering quality crosses but Belgium just not getting the ball into the target.
Anderwerield gets a yellow now for a foul on Matuidi.
Read more > 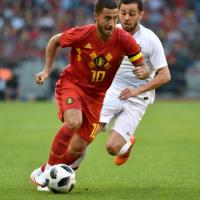 00:56   Belgium waste 2 chances
Chadli passes it to Hazard, who rallies it to Mertens whose shot is punched out by Lloris
Fellaini then heads a Mertens cross wide of the post.
Two chances go down for Belgium there as they now feel the pressure with 65 minutes on the clock.
Belgium create a chance but it flits away in a goal-mouth melee.
Mertens in for Dembele.
Hazard gets a yellow for a challenge on Matuidi.
Read more >

00:48   Umtiti in special club
France now upping the ante here.
Mbappe is making sharp runs from the right and threatening to double their lead.
Belgium have been rattled by Umtiti opener and are found wanting.
FIFA reports that Umtiti has joined a special club with that goal. Four of France's last six goals in World Cup semi-finals have come from defenders -- Marius Tresor (v West Germany, 1982) and Lilian Thuram (two v Croatia, 1998).
Read more >

00:43   Umtiti heads in corner
France counter attack, they get a corner and they take the lead.
Umtiti heads in the superb cross from the corner taken by Griezmann. He beat Fellaini to the jump to score.
French President Macron celebrates.
The 2nd half has begun and Lukaku heads a delicious Witsel pass just over the bar.
Belgium creating chances here but not managing to get the final call.
Read more >

00:22   Hazard sensational for Belgium
That is the half-time whistle and what a game we've had so far.
Hazard and De Bruyne have been superb for the Belgians while France have threatened on the counter.
Lukaku misses a chance just before half-time. De Bruyne's shot from the right is wrongly judged by Umtiti and it catches Lukaku by surprise, who does not have enough time to get to it. The ball ricochets off the striker and goes wide.
Witsel loses possession, Pogba chips it to Matuidi on the right but nothing comes off the build-up.
Dembele brings down Pogba outside the box and it's a dangerous free-kick. Greizmann does not get the elevation, curling the free-kick into the wall.
Mbappe crosses to Pavard on the left and Courtois keeps it out.
Corner comes to nought.
Lukaku has been kept quite as Dembele fouls.
Belgium lose the ball and Griezmann cuts past a few defenders only to release a loose left-footer wide of the goal.
Hazard looks like a man on a mission while Giroud makes a hash of a couple more chances at the other end.
Read more >

00:02   A battle of equals on show
France win a free-kick, Griezmann to Pavard, who shoots to Giroud, who goes low and heads it just wide.
Hazard rallies the ball to De Bruyne on the left. De Bruyne shoots in a low cross into the danger zone. Umtiti excels to sweep it away.
After 25 minutes, France now dominating play. The movement is in the Belgian half and Griezmann's corner is nodded out by Fellaini.
On the counter, Umtiti picks out Giroud, who slides but the ball kicks the ball just wide.
Frustration for the Frenchman.
Lloris denies Belgium to punch out Alderwerield's shot, who swivels and shoots from 14 yards
What a save!
Wow!
Hazard is on fire. He takes the ball and fires a shot, Varane gets a deflection and a corner to Belgium that amounts to naught.
Matuidi shoots and is well saved by Courtois.
Close call for France, saved by the angle.
De Bruyne passes it to Hazard who shoots low but is done in by the acute angle.
Read more >

Mortal remains of Gen Rawat, others being taken to Delhi

'Would love to see Paine play again for Australia'