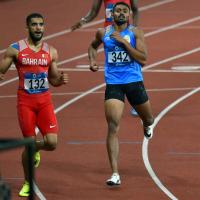 18:44
Manjit Singh upstaged pre-race favourite compatriot Jinson Johnson to win gold in men's 800m in a 1-2 finish for India.
The 28-year-old Manjit ran his personal best time of 1 minute and 46.15 seconds to win his maiden major international medal.
Johnson, who smashed legendary Sriram Singh's 42-year-old 800m national record in June during the National Inter-State Athletics Championships, finished second in 1:46.35. He holds the national record of 1:45.65.
Abdalla Abubaker of Qatar who was leading the race finished third in 1:46.38. 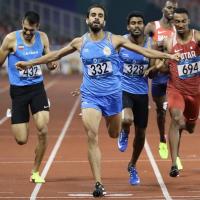 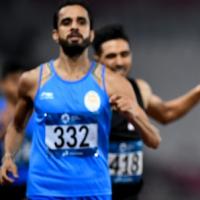 17:57   Hima Das disqualified
Dutee stormed into the final by winning the semifinal in personal best time of 23:00 seconds, which was faster than her qualification round timing.
Dutee was in third position in the beginning but made up in the last 50m stretch to edge out Edidiong Odiong (23.01) and Lingwei Kong (23.32).
Hima, the silver medallist in the women's 400m, lined up for the semifinal heat number two but had to make a premature exit due to a false start. She will now hope to make up for the mistake in the mixed 4x400m relay, making its debut at the Asian Games, later in the day.
Dutee was faster than Hima in the qualifying, clocking 23.37, compared to 23.47 of the latter.
In the National Inter-State Championships in June, Hima had won the 200m gold in 23.10 ahead of Dutee, who had clocked 23.41.
Read more >

17:29   Asian Games Updates: Dutee in 200m final; heartbreak for Hima Das
It is Hima Das's turn to join Dutee Chand in the final.
Horrendous!
That is a false start from Hima. It is the end of her 200m race.
Read more > 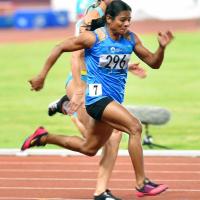 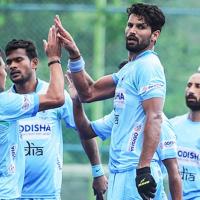 The Indian never quite got a measure of her opponent in a contest that could hardly be described as exciting.

Jo was the one mounting most of the few attacks and being a southpaw, she became all the more difficult for the Indian to decipher. Her jabs connected powerfully but the bout itself wasn't particularly impressive, given that both the boxers spent a considerable time clinching and holding.

The duo ended up getting a warning each for clinching.

The Indian was a comprehensive winner in the first round, unaffected by the partisan crowd's loud support for Hasanah.

However, Hasanah put the power in her punches from second round onwards, not missing a chance to connect.

Pavitra, making her debut at the Games, stood her ground but the effort could not find favour with a majority of the judges, who ruled 3-2 in favour of the Indonesian.

The remaining quarter-finals will be held on Wednesday.

Two-time medallist Vikas Krishan (75kg), Amit Panghal (49kg), and Dheeraj Rangi (64kg) will fight it out for a place in the men's semi-finals, while Sarjubala Devi (51kg) is the lone woman left in fray for the country.
Read more > 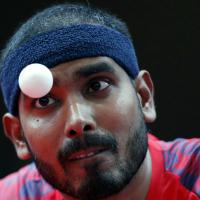 The team comprising G Sathiyan, Achanta Sharath Kamal and A Amalraj couldn't put up a fight against the mighty Koreans, who set up a summit clash against defending champions China in a repeat of 2014 edition.

India had yesterday defeated fancied Japan 3-1 in the quarter-finals to assure the country its first-ever Asian Games medal in table tennis.

India did not have a single medal in the sport which was introduced in the Games program in 1958. The likes of China (61 gold), Japan (20) and South Korea (10) swept the medals for long time.

The Indian team made an impressive start, pocketing the first 25-21. But, Pakistan fought back to win the second and third sets 25-21 both.

In the fourth set, India could only score 23-25 as Pakistan emerged victorious in the contest that lasted 100 minutes.

The Indian women's team will also play classification matches after it went out of medal contention from Pool B.
Read more > 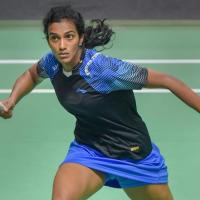 12:59   Silver for Sindhu after losing to Tzu Ying in final
India's PV Sindhu finished with a silver medal after losing to World No. 1 Tai Tzu Ying of Chinese Taipei in the women's singles final at the Asian Games. 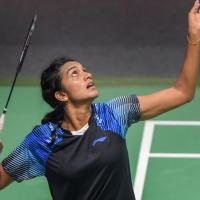 12:44   Sindhu loses first game vs Tzu Ying in final
PV Sindhu faces an uphill task ask World No. 1 Tai Tzu Yung clinched the first game 21-13 in 16 minutes.
She has taken a commanding 11-7 lead at the break in the second game.
Read more >

12:38   Indian men's archery team lose in gold medal match
The Indian men's archery team narrowly lost out on a gold medal after they lost in a shootout to South Korea in the gold medal match in the compound men's team archery event.
The final finished level at 229-229 after the four sets, taking the contest into a shoot-off where again the scores were level at 29-29. However, Korea were declared the winners on basis of most 10s shot during the final.
Earlier, Indian women's compound team signed off with a silver medal after losing to South Korea in the final.
The Indian team comprising Muskan Kirar, Madhumita Kumari and Jyothi Surekha Vennam, lost 228-231 to Korea in a contest that went down to the wire till the final set of arrows.
Read more >

12:35   Indian men's archery team lose in gold medal match
In the shoot-off, Korea started with a 10 but India managed just nine with their first shot.
An under pressure Aman Saini shot a 10 to level the scores at 19-19.
Korea kept themselves ahead with 10 with their final but Rajat Chauhan shot a 10 to level the shootout at 29-29.
However, Korea won the contest on basis of number of 10s after the shootout finished level. 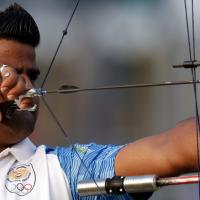 The Indian men's team comprising of Rajat Chauhan, Aman Saini and Abhishek Verma were level at 229-229 after the fourth and final set taking the contest into a shoot-off.
Read more >

12:24   India vs Korea 172-170 in men's archery gold medal match
India have again taken the lead after shooting 58 points in the third set to go ahead 170-172 in the compound men's team gold medal match.
Just six arrows to come in the final and fourth set.
Read more > 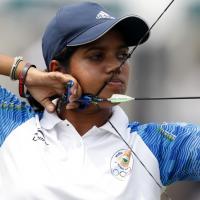 11:49   India women lose to Korea in archery gold medal match
The Indian women's archery team went down 231-228 to Korea in the compound women's team gold medal match to finish with a silver medal at the Asian Games.
The Indian team comprising of Muskan Kikar, Madhumita Kumar and Surekha Jyoti Vennam faltered right at the end, scoring just points 55 in the fourth and final set, after the match was evenly poised at 173-173 at the end of the third set.
Read more >

11:32   India vs Korea 173-173 in archery gold medal match
It continues to be an even contest as both India and Korea score 58 in the third set, with the overall score still level at 173-173.
Everything to play for in the fourth and last set.
Read more > 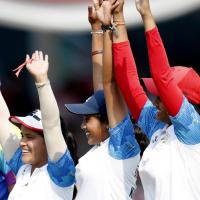 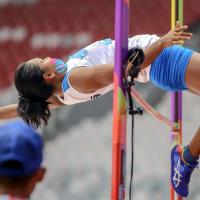 Swapna jumped into the lead following an impressive showing the high jump with 1984 pts, while Purnima is two spots behind with 1891 points.

Swapna had finished fifth in the women's 100m before she took top spot in the high jump with 1.82m.
IMAGE: India's Swapna Barman in action during the women's heptathlon.
Photograph: Rahul Pawar/Twitter
Read more >

09:47   Dutee, Hima qualify for 200m semis
India's sprint duo of Dutee Chand and Hima Das qualified for the semi-finals of the women's 200m, at the Asian Games on Tuesday.
Dutee, who won silver in the 100m, topped the heat with 23.37 seconds.
Hima, who is looking to win four medals at the 2018 Asian Games, qualified with timing of 23.47 seconds.
PV Sindhu will be seen in action in the gold medal in the women's singles at 11.40am IST. She will take on World No. 1 Tzu Ying Tai of Chinese Taipei in the final.
Read more >

Australia to reschedule South Africa tour 'as soon as possible'