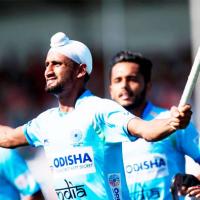 19:58
Mandeep Singh makes it 8-0 for India in the preliminary round of men's tournament Pool A game against Japan.

19:29
Penalty stroke for India and Rupinderpal Singh makes no mistake to give India 5-0 lead. 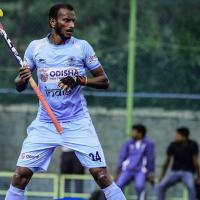 19:23
In the 32nd minute Mandeep Singh scores the fourth goal to give India 4-0 lead against Japan.

18:53
Drag-flicker Rupinderpal Singh made the scoreline 3-0 off a penalty corner. 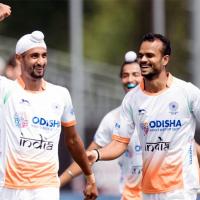 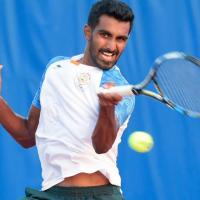 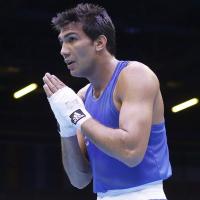 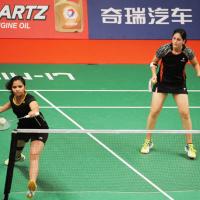 16:49   Boxer Solanki loses
There is some good news coming in from the badminton arena, this time the women's doubles pair of Sikki Reddy and Ashwini Ponappa beat World No 17 Malaysian pair 21-17, 16-21, 21-19 to advance to the quarters.
Indian boxer Gaurav Solanki loses to Japanese Tanaka in the 1st round of the 52 kg event.
Read more > 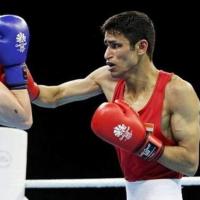 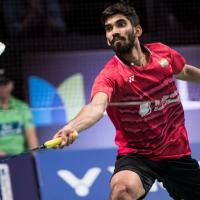 15:55   Pallikal assures India a medal in squash
India's badminton medal hope in the men's category, Kidambi Srikanth has been dumped out of the Asian Games in the first round by Hong Kong's Wong Wing.
Srikanth lost 21-23, 19-21 in a match that looked close but Srikanth was nowhere near his sublime best we have been used to seeing.
Meanwhile, Dipika Pallikal Karthik has assured India of another medal after after moving into the women's squash semi-final with an easy 3-0 win over Misaki Kobayashi of Japan.
In news from  the gymnastics arena, India's medal hope, Dipa Karmakar finishes 5th in the balance beam final event. She records 12.500 points.
Read more > 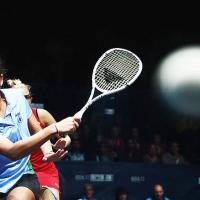 15:37   India compound team archers out; India women lose Kabaddi final
Dipika Pallikal Karthik has assured herself and India of a medal after moving into the women's squash semi-final with an easy 3-0 win over Misaki Kobayashi of Japan.
In badminton, K Srikanth has lost the first game to Hong Kong's Vincent Wong Wing 23-21.
In the second game, both players are neck and neck. Wing is playng a fast game and inducing errors from Srikanth.
Wing races to a 11-7 lead going into the interval.
After the break, Srikanth has earned four big points in a row to keep Wing's lead to just one point.
Srikanth now gets a two-point lead but he is chased down consistently by the HK player.
Wing goes level at 18 all and another stupid error from Srikanth sees Wing get to match point.
Kidambi then increases the pace of his rally and saves a point.
But the 20-year-old Wing creates an upset by defeating Srikanth in the round of 32 match here at the Asian Games.
Read more >

15:04   India lose to Iran in Mixed Compound archery
India's campaign in the Mixed Compound Archery comes to an end after Jyothi Vennam and Abhishek Verma were edged by Iran in the quarter-finals.
Iran beat India 155-153 to progress.
India's Jyothi Vennam and Abhishek Verma take on Iran in the Compound mixed event quarter-final.
India take aim and get 19 points.
Iran go level with 19.
India now and Vennam and Verma hit bulls-eye.
Iran now take aim and they get 18 points. India now have a 1-point lead.
At End 2, Iran start first and they hit 20, India keep up.
India 78 and Iran 77 at the end of this round.
At the next round. Iran hit 20 and India now go back after they get 18 points.
Iran now maintain pressure and hit bulls eye twice.
India now fall behind by two points as Iran lead 117-115.
In the next round India start with 18 points as both Vennam and Verma hit 9 each.
Iran then hit 19 points and open up a 3-point lead.
India then hit 20 points. Iran take aim and hit 19 and keep lead.
Iran 155 eventually beat India 153.
Read more > 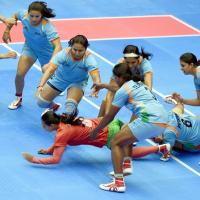 14:27   Iran win gold
India's women's kabaddi team upset by Iran to win the gold  medal at the Asian Games on Friday.
Iran beat India 27-24 to clinch gold in a match that India fought till the very end.
Earlier, in Women's 63 kg Snatch, India's weightlifter Rakhi Halder failed to lift 93 kg in all her 3 attempts.
Read more > 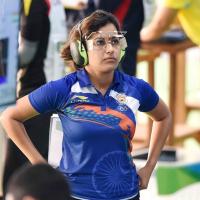 12:08   India now have 23 medals at the Games so far
Heena Sidhu wins bronze in the 10m air pistol event.
Manu Bhaker has been eliminated from the 10m air pistol final while Sidhu continues to fight on with a shot of 10.2.
And the 28-year-old Sidhu ensures a medal for India.
She faces off against a Chinese and a Korean for the silver.
She shoots a 10.8 and then a 9.6 and has to be content with a bronze.
China win gold and Korea take silver.
India add another gold to their kitty after Rohan Bopanna and Divij Sharan beat Kazakh team 6-3, 6-4 to win GOLD for India.
Read more > 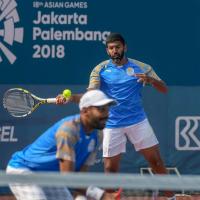 11:47   Sindhu, Bhaker in action in 10m air pistol final
India have another gold on the day after Rohan Bopanna and Divij Sharan beat Kazakh team 6-3, 6-4 to win GOLD for India.
After Stage 1 Sidhu has gone down to the 7th spot and faces elimination, while Bhaker is on No 5.
After 12 shots Sidhu is now up  to 4th spot. Bhaker down to 6.
Bhaker survives elimination after hitting a 10 pointer.
In the men's doubles final, Rohan Bopanna and Divij Sharan just two points away from gold medal.
Read more >

11:37   India win 3 medals in rowing
Heena Sidhu and Manu Bhaker are at No 5 and No 6 spot after the first series of shooting.
Earlier in morning, India won 1 gold and 2 bronze in Rowing.
India's Men's Quadruple Sculls team of Sawaran Singh, Dattu Bhokanal, Om Prakash and Sukhmeet bring home the gold.
They won with a timing of 6:17.13.
India edge Pakistan 28-27 in their handball match at the Asian Games.
Read more > 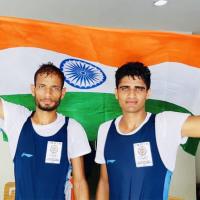 11:06   Handball: India clinch 28-27 win over Pakistan
India edge Pakistan 28-27 in their handball match at the Asian Games.
Navin scores in the dying seconds to take India across the line in a match that was played on level terms for most part of the match.
India's keeper Atul does well to make 2 back-to-back saves.
India then score on the counter.
With four minutes left on the clock India need to attack and find a bigger goal lead.
Pakistan then drill in one after a lovely cross-court set-up.
A lovely game of passing and Navin bangs the ball into the net. India now 27-25 up.
After the time-out, Pakistan score with 90 seconds to go.
Pakistan counter and score to take the scores level at 27-27.
With 35 seconds to go another time-out called.
Navin scores with 25 seconds to go and that is the win for India!
Earlier, India won 1 gold and 2 bronze in Rowing.
India's Men's Quadruple Sculls team of Sawaran Singh, Dattu Bhokanal, Om Prakash and Sukhmeet bring home the gold.
They won with a timing of 6:17.13.
Read more >

10:49   Handball: India have slender 25-24 lead
Back to some handball action, and after the break, Pakistan have clawed their way back to go level with India at 19-19.
Both teams now playing at full steam and Pakistan now have a one goal lead at 23-22.
India's forward Karamjeet scores a brilliant goal to take India level at 23-23.
A brilliant set-up and India's Grenidge gives the team a 24-23 lead.'
India's Sachin Bharadwaj suspended for a rough tackle on his opponent and he serves a 2-minute suspension.
Grenidge awarded a 7m throw on a foul and he scores to keep India in the lead.
At the timeout, India have a slender one-point lead over the arch-rivals at 25-24.
In archery,
India's struggling recruve archers were in for more shock with Deepika Kumari and Atanu Das suffering an upset defeat at the hands of lower-ranked Mongolia in the Asian Games here via shootout.
The 4-5 loss in the mixed team quarterfinals left the Indian squad shell-shocked as Deepika yet again floundered under pressure, finding a seven in the second shot of the shoot-off, which led to their ouster.
Earlier, India won 1 gold and 2 bronze in Rowing.
India's Men's Quadruple Sculls team of Sawaran Singh, Dattu Bhokanal, Om Prakash and Sukhmeet bring home the gold.
They won with a timing of 6:17.13.
Read more >

India's struggling recruve archers were in for more shock with Deepika Kumari and Atanu Das suffering an upset defeat at the hands of lower-ranked Mongolia in the Asian Games here via shootout.

The 4-5 loss in the mixed team quarterfinals left the Indian squad shell-shocked as Deepika yet again floundered under pressure, finding a seven in the second shot of the shoot-off, which led to their ouster.

10:05   Handball: India take a 2-point lead over Pakistan at the break
Following the timeout, India have given away a goal as Muzammil scores for Pakistan, breaking the Indian defence well despite the marking.
India score on the counter to go up 13-11.
India's keeper Atul does well to deny Pakistan and then nearly scores from a direct attack.
India score another before Pakistan pull one back just before the half-time whistle.
India go into the break with a slender 14-12 lead over the arch-rivals.
India awarded a 7m throw and they are now level with Pakistan at 9-9.
But the Indian defence is caught napping again and they take a 10-9 lead.
An excellent interception, the ball ricochets off the cross bar and Aditya scores an sensational goal to go level at 10-10.
India score on the counter to take a 11-10 lead.
India are now taking it to the opponents and Karamjeet scores another.
India are 12-10 ahead at the timeout.
Read more >

09:53   India face Pakistan in handball
Handball now and it's arch-rivals India and Pakistan facing each other.
Pakistan have a slender 9-8 lead after 20 minutes of play. A timeout has been called and it's Pakistan looking like the better team.
Earlier, India won 1 gold and 2 bronze in Rowing.
Read more > 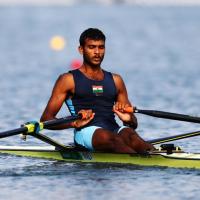 09:27   This is India's 5th gold at the Games.
There is more good news this morning from the Asian Games.
India's rowers have struck gold!
India's Men's Quadruple Sculls team of Sawaran Singh, Dattu Bhokanal, Om Prakash and Sukhmeet bring home the gold.
They won with a timing of 6:17.13.
Indonesia bag silver while hosts Indonesia finish behind them to take bronze.
This is India's 5th gold at the Games.
In the lightweight double sculls event, rowers Rohit Kumar and Bhagwan Singh won Asiad bronze.
This was India's 2nd bronze medal of the day.
Read more > 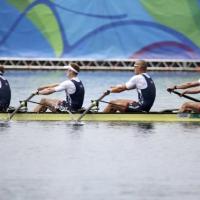 Dushyant won India its first medal in rowing at the ongoing 18th Asian Games, claiming a bronze in men's lightweight single sculls in Palembang on Friday.

Dushyant finished third on the podium with a timing of 7.18.76 as India enjoyed a good beginning to the sicth day of competition.

The Indian had won a bronze in the last edition of the Games, too, in Incheon.

This was India's 19th medals at the ongoing Games and 12th bronze. The country has also won four gold and as many silver.

Mortal remains of Gen Rawat, others being taken to Delhi

'Would love to see Paine play again for Australia'